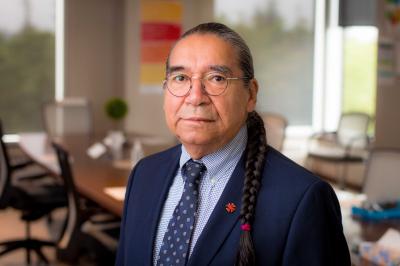 Stephen Augustine is a Hereditary Chief of the Mi’kmaq Grand Council and the Associate Vice-President of Indigenous Affairs and Unama’ki College at Cape Breton University. He was the Curator of Ethnology for Eastern Maritimes in the Ethnology Services Division of the Canadian Museum of Civilization in Gatineau/Ottawa. He holds a Masters in Canadian Studies from Carleton University and a BA in Anthropology and Political Science from St. Thomas University. Mr. Augustine has shared his expertise in research and traditional knowledge with many organizations, including government departments, the Assembly of First nations, and various Aboriginal communities across Canada. He has been Elder Advisor to the Federal Court of Canada Judges, the Truth and Reconciliation Commission and the Human Rights Commission of Canada. In his role as Hereditary Chief of the Mi’kmaq Grand Council and by Elders’ training since an early age, he has a thorough command of traditional practices, his language and the history of his people.