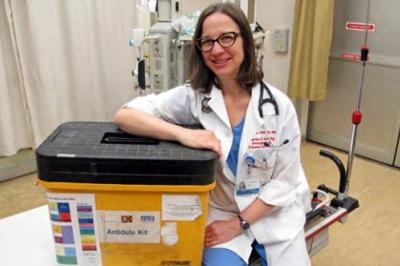 Dr. Nancy Murphy sits with an antidote kit. Many community hospitals didn’t think they needed many antidotes on hand— thanks to the N.S. Antidote Program’s data collection and analysis, they now recognize the need to have the antidote kit on site.

“We collaborate with all the emergency departments and hospital pharmacies in Nova Scotia to ensure every centre has timely access to the recommended antidotes,” says Dr. Nancy Murphy, emergency physician and medical director of the provincial antidote program. “We track the use of the antidotes, so they can be re-stocked quickly, and analyze geographic usage patterns so we can pro-actively stock the optimal mix of antidotes for each centre, based on the most common poisonings in those areas.”

The antidote for acetaminophen is the most heavily used. “Every two days, someone in Nova Scotia needs the acetaminophen antidote,” notes Dr. Murphy. “Other antidotes we frequently need are those for opioids, blood pressure medications, and toxic alcohols.”

According to Dr. Murphy, most of these poisonings are deliberate, and some are accidental. Prompt treatment with the appropriate antidote is crucial to saving lives and protecting against permanent organ damage.

“Our next step is to study the economics of antidotes,” she says. “The average cost of a single dose of the antidote for toxic alcohols is $1,000, and a lot of hospital administrators will say, ‘that’s too expensive to have on hand!’ But, when you compare the cost of the antidote to the cost of dialysis for kidney failure, it is likely more cost-effective.”

“This is a very important finding—before we had this evidence, a lot of community hospitals didn’t think they needed many antidotes on hand,” Dr. Murphy says. “Now they recognize the need to have the antidote on site or readily accessible nearby.”

If a hospital unexpectedly uses up its supply of a particular antidote, it can contact the provincial program to find the location of the nearest dose. This can be delivered, or the patient sent there.

“As far as we’ve been able to ascertain, ours is the only program of its kind in North America and quite possibly the world,” says Dr. Murphy. “The data collection and analysis, ongoing monitoring and communication ensures virtually immediate access to antidotes. This is of particular importance if we start to see a fentanyl crisis in Nova Scotia.”

If you are 80 and over, you can now book a vaccine clinic appointment online