From employee to patient: How Valley Regional Hospital saved a man’s life with a CT scanner 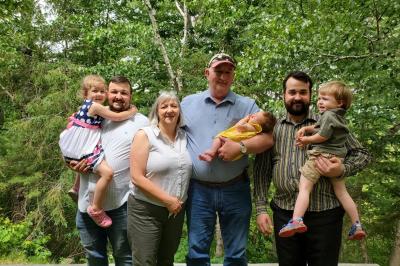 For 21 years, Roy Harris has worked at Valley Regional Hospital in Kentville as a maintenance professional, where he looks after and repairs plant equipment and machinery.

He never could have imagined that the very place he takes care of would one day save his life – twice.

When Harris began having trouble breathing, he went to the emergency department and managed to communicate that he was unable to breathe.

His lung had collapsed.

The pressure building inside his body was life-threatening and with each passing moment, it became harder and harder for Harris to breathe.

His coworkers in the emergency department did their best to insert a tube into his chest.

The tube would release the air out of his chest cavity so his lung could re-inflate and allow him to breathe easy again.

After a few attempts to try to get the tube where it needed to go, it became apparent that Harris would need the precision that comes with a computerized tomography (CT) scan to get the chest tube in successfully.

“Within minutes, it went from ‘I can’t breathe’ to ‘I am breathing comfortably,’” said Harris. “I could actually breathe.”

The CT scan allowed the radiologist to get a clear and quick image of his body, and the tube went in on the first insertion.

“The tube only had to go in once,” said Harris. “There’s no guess work to it.”

Without the precision from the CT scan, his health care team would have had to continue to try to insert the tube in without any assistance.

“I don’t know what they would’ve done if they couldn’t get the tube in,” said Harris.

Several weeks later, his lung had collapsed a second time.

Harris went through the same procedure where he started in the emergency department and was moved to get a CT scan to allow for greater accuracy for chest tube insertion.

Harris is beyond appreciative to his coworkers at Valley Regional Hospital and for the CT scanner.

“I see these people every day,” he said. “My thanks go out to them. I truly wouldn’t be here today if it wasn’t for them.”

Spending time with family is Harris’s greatest treasure. He and his wife recently welcomed their newest grandchild, who left the hospital to go home on the same day that Harris was released from the hospital after his lung collapsed the second time.

“I want to send my sincerest thanks to everyone who was involved at Valley Regional Hospital and the Victoria General.”