“Give what you can, take what you need” Community Health Boards fight food insecurity 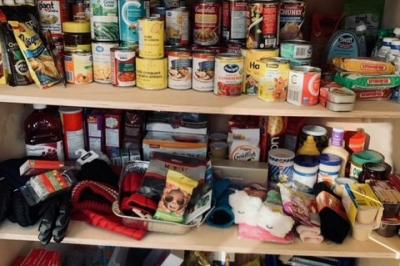 Food security is a top priority for the Community Health Boards (CHBs) in Eastern Nova Scotia. After seeing the need in their communities, CHB volunteers Mary Desmond and Shaunna Scott decided to take action.

Nova Scotia has the highest rate of food insecurity in Canada, according to the 2017-18 Canadian Community Health Survey.

Despite the numbers, food insecurity remains an unrecognized problem in many communities.

“I don’t think it hits home,” said Desmond a resident of Upper Big Tracadie, Nova Scotia. "People think ‘that doesn’t happen here, not in my backyard.’ But it is happening here.”

Scott noted that the COVID-19 pandemic has made food security even more of a challenge in her community of Mulgrave, Nova Scotia.

The lack of food banks and access to grocery stores means that people must travel to get their necessities.

“It makes it hard for people who don’t have a car to get what they need,” noted Jocelyn Stewart, a volunteer with the Mulgrave Food Pantry. “It’s not uncommon to see people doing their grocery trips once a month, or even less frequently,” she added.

This lack of access to resources is what inspired Desmond, Scott, and a mighty group of volunteers to open their own food pantries for those in need.

The idea was to keep things simple and operate on a “give what you can, take what you need” basis.

“I decided one day that I had an old filing cabinet I want to get rid of,” said Desmond. “I didn’t want to put it in the landfill, so I thought ‘we can put good use to this.’”

Along with a group of volunteers, Desmond set out to stock the filing cabinet with a variety of canned meats, seafood and vegetables. She also asked a friend of hers to paint the cabinet so that it would stand out.

“At first we didn’t know if people would actually use it,” said Stewart. But a steady increase in uptake combined with a more prominent location have made the food pantry a source of pride in Mulgrave.

The goals of the food pantries are to be accessible to anyone and everyone who needs it.

“It has no hours; its open 24/7,” said Desmond, adding “there are no forms to fill out and it’s completely anonymous.”

For privacy and anonymity reasons, the organizers don’t know exactly how many people rely on their food pantries.

But the volume of food that flows through the pantry on a daily basis makes Desmond think that upwards of 200 people access it each day.

“I thought we’d fill it up once a week, but sometimes it’s twice a day,” said Desmond.

Keeping the pantries fully stocked is a community effort. Donations of canned food, toiletries and other necessities are continuously, and often anonymously, added to the pantry.

“My heart was overwhelmed by what people were giving and doing,” said Desmond, adding “even those who use the pantry help re-stock it when they can.”

“The support we’ve received from the community really warms our hearts,” said Hadley.

In addition to daily donations from individuals, she noted that local businesses have contributed to the food pantry as well.

While Desmond, Scott, Stewart, and Hadley all agree that large-scale interventions are needed to address the issue of food insecurity in Nova Scotia, they also acknowledge that there are steps communities can take to alleviate hunger in their area.

“Sometimes you just have to start small,” noted Desmond.

And that’s exactly what communities throughout Nova Scotia have been doing.

Exemplifying their “take what you need, give what you can” motto, Community Health Boards are continuing to share ideas, tips and strategies to address one of the most important health and wellness issues in the province.