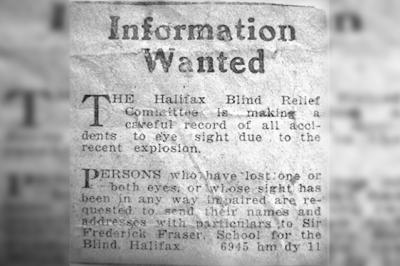 When the Mont Blanc and Imo collided and the Mont Blanc – a munitions ship – caught fire, many residents went to their windows to watch the action unfold. As a result, “nearly 600 survivors sustained eye injuries in the ensuing blast – many lost one eye, 16 lost two eyes. Nearly 40 were totally blinded.”1

Dr. George H. Cox, an oculist from New Glasgow, arrived in Halifax on Dec. 6 to lend his support to the disaster response. While he began by providing general care, he quickly realized his specialized expertise was most needed. He wrote of the experience:

“For the rest of the night I was busy every minute either on cases I picked out of the heaps [of people] on the floors or being called on by my medical friends to operate on cases they had found. To make a long story shorter for the whole of that night and for all of the next 5 days and part of the nights I did nothing but patch up eyes. During that time I have now no record to show the number of cases treated, but I know that some days my table averaged one chloroform case every 15 minutes, while I was often able to sandwich in a cocaine case while my next patient was going under.”2

1 Flemming, David B. Explosion in Halifax Harbour: The Illustrated Account of a Disaster that Shook the World, pp. 62, 64, 67. Halifax: Formac Publishing Company, 2004.

2 Marble, Allan. A Day in the Life of Dr. George H. Cox: One physician, 1,500 victims of the Halifax Explosion: http://www.doctorsns.com/en/home/benefits-and-services/doctorsNS-magazine/currentissue/a-day-in-the-life-of-Dr-George-H-Cox.aspx