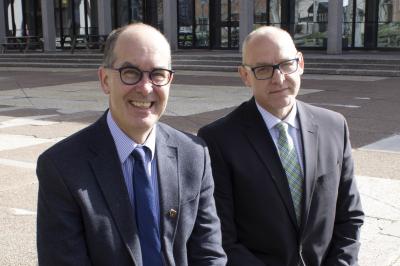 Thanks to the efforts of a large team at NSHA and Dalhousie Medical School, Aspirin is now proven to be just as effective as the prescription anticoagulant drug, rivaroxaban, in preventing blood clots after hip and knee replacement surgery.

These are the results of a four-year, Halifax-led, cross- Canada clinical trial involving more than 3,400 patients recovering from hip or knee replacement surgery. The patients were randomly sorted into two groups—half were given Aspirin (ASA), half rivaroxaban. Surgeons following the patients’ recoveries found little difference in the occurrence of clots in the legs or lungs or bleeding complications at the incision site, between the two groups.

Susan Pleasance, associate director of hematology research at NSHA, led the team that organized and executed the study, which involved 15 universityaffiliated health centres across Canada. NSHA’s Research Methods Unit played a key role in designing the analytical framework and overseeing the data collection and preparation for analysis.

“The study was designed and run entirely out of this organization in Halifax,” notes Dr. Anderson. “That’s a big deal… it’s a multi-million dollar endeavour and it’s very complex. Kudos to the team here.”

Blood clots are a known risk after hip and knee surgery and, if a clot travels to the lungs, it can be fatal (pulmonary embolism). “Rates of post-op blood clots have been around one or two per cent, historically,” says Dr. Dunbar, who invited orthopedic surgeons from across Canada to the study. “Anticoagulant agents like rivaroxaban can reduce the risk below one per cent, but these agents are often associated with significant bleeding risks.”