The woman behind the mask: Dr. Lisa Barrett 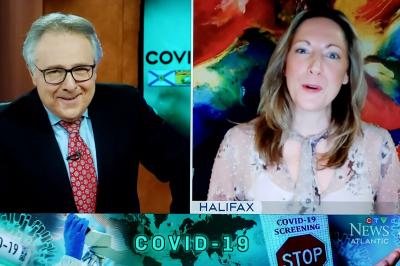 Over the past year, Dr. Lisa Barrett has gone from being a household name in the international science and infectious disease community to one of the most recognizable faces and voices in households across the Atlantic Bubble.

Barrett has been the public face of all things COVID-19 since mid-March, sharing her knowledge and advice with Maritimers eager to understand the implications and potential devastation of this pandemic.

The 45-year-old native of Old Perlican, Newfoundland (Pop: 700) is popular among local and national journalists because she can take a complicated, constantly evolving topic and break it down into easily digestible nuggets.

“Dr. Barrett has emerged as an essential source of reliable information about the coronavirus,” said CTV Atlantic executive news editor and senior anchor Steve Murphy. “She has the unique ability to translate her considerable scientific knowledge into easily understood explanations.

“Since the earliest days of the pandemic, she has been our go-to for answers to the questions most often posed by our viewers,” said Murphy.

Whether it’s proper mask usage or the latest on emerging vaccines, Barrett has been a trusted source for sharing the facts surrounding COVID-19.

But who is the woman behind the mask?

Barrett laughs when asked where she grew up: “Thriving metropolis of Old Perlican, at the end of the world at the tip of the Avalon Peninsula.”

It was in this small fishing village that Barrett first got the infectious disease bug. She began studying immunology in a high school science lab, and loved it.

From there Barrett moved just down the road to St. John’s where at Memorial University she earned her undergrad, honours degree, medical degree and a PhD.

As a rising star in the infectious disease world, Barrett has rubbed shoulders with some of the biggest and brightest scientists in North America.

In fact, she spent two and a half years doing clinical trials and lab work with another person who has emerged from the laboratory into the media spotlight, Dr. Anthony Fauci.

She considers Fauci a mentor, and while they haven’t spoken much during this global pandemic, Barrett says Fauci has been watching with envy at how we have been able to keep the virus at bay, relative to other jurisdictions.

It was while working with Fauci that Barrett saw the priority he placed on keeping the public informed on the latest from the scientific world.

“He really reinforced that predisposition towards bringing public messaging out when I was working there,” Barrett said. “He’s always said, ‘Make sure if you have a science story, that you communicate it out to the right people.’”

Barrett believes health care providers play a pivotal role in educating the public. “Health without knowledge doesn’t happen. So, if you can be part of that knowledge then you’re part of peoples’ health.”

While many people tend to instinctively run in the other direction when a reporter calls, especially if it involves interacting with people through a call-in segment, Barrett embraces it.

“I love the opportunity to hear questions from people. And to get a sense of what people want to know. It’s kind of exhilarating. I feel like I’ve done something good to my day.”

With so many TV interviews now happening virtually through video platforms like Zoom and Skype, there’s been a great deal of interest from audiences to what people have behind them while being interviewed. And Barrett is no exception to that fascination and curiosity from viewers.

From almost the beginning of her pandemic TV hits, Barrett has presented herself in front of a large brightly coloured painting on her wall. And she’s even been graded on social media for her background.

A twitter user with the handle @ratemyskyperoom took notice of Barrett’s painting while she was doing a national interview, commenting, “Bold and beautiful. Needs plant/lamp for depth but 8/10 for the art.” Barrett responded to the tweet with, “Apparently I have some work to do. Not a big fan of being at 80 per cent.”

All kidding aside, the painting has special meaning for Barrett. While it’s not expensive and isn’t an original, the artwork was bought at a pivotal time in her life.

“It was from a very early point in my career. I was a trainee until I was almost 40-years-old, so I didn’t own a whole lot of quality stuff,” she recalled.

“I wanted a piece that was super bright and it was one of the first things I had bought for a new house that was really of significance. It was kind of my dream job coming back here and that was a treat to be able to buy this.”