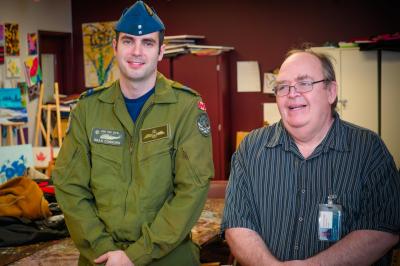 Patients in acute care mental health units often arrive with very few belongings. But with the help of members from 12 Wing Shearwater and a clothing program through NSHA, mental health inpatients in Halifax are getting the items they need.

Clothes City is a program created by NSHA staff that provides access to free donated clothing. However, in past years, it has been difficult to stock male clothing. Most donations made to the program are from NSHA employees, the majority of whom are female.

This led Jacqueline Connors, recreation therapist, to reach out to 12 Wing Shearwater three years ago for help. The wing agreed to do a clothing drive, and they have each year since. .

This year was the most successful year for the partnership. Military personnel collected and donated 15 large bags containing mostly men’s clothing, including much-needed items of winter coats, sweaters, boots and socks

“We started out with just my unit the first two years,” said Capt. Sean Connors, Pilot Training Section Commander at 406 Maritime Operational Training Squadron in Shearwater. “But with the great success we’ve been having, we decided to make the clothing drive for all members across 12 Wing Shearwater.”

Clothes City also functions as a back-to-work program run by past patients, including volunteer Paul who has been a volunteer at Clothes City for about four years. His role during the clothing drive was to unpack and organize the clothing, making it accessible to patients.

“Paul, and all other volunteers, have such warm hearts and make us feel like ‘normal’ people—not patients,” said a current patient who didn’t wish to be named.

Jacqueline Connors said patients were appreciative of the generous people who donated their clothing, giving them the opportunity to own a winter jacket and other warm clothes. With the proper clothing options, patients can participate in gym classes, outings and other recreation activities while in the hospital. They then have this clothing for when they are discharged back to the community.

Clothing donations are accepted year-round. Items can be dropped off in the bin by the security desk at Abbie J. Lane. If you would like to know more about Clothing City, contact Jennifer Barnes at 902-473-6323.