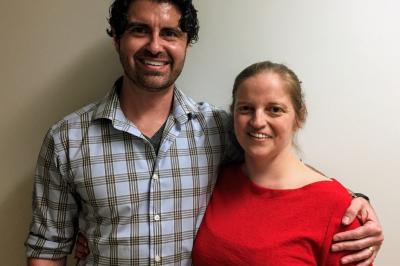 In 2002, Chris Fraser was a bank teller with no medical background or training. Now, he’s a registered nurse (RN) and health services manager on the intermediate Medical/Surgical Intermediate Care Unit (MSIMCU) of the Halifax Infirmary.

It may seem like a drastic career change, but for Fraser the switch makes sense. He decided to go back to University and train to be a registered nurse (RN) after he became a live kidney donor to his younger sister, Bonnie Desrosiers (Fraser). It’s a choice that changed both his life and his sister’s life forever.

As a young adult, Bonnie’s kidney function took a turn for the worse making a kidney transplant imminent. As it declined, Chris and his parents grew desperate. Bonnie needed a transplant immediately or she faced undergoing dialysis.

Fearful he would develop late onset of PKD and would become unable to donate to his sister, Chris and his parents reached out to the nephrologist who originally cared for Bonnie as a baby.

“He assured us it was impossible for me to contract PKD,” Chris said. “With this new and exciting news, I was eager to check my compatibility and help my little sister.”

After multiple tests, meetings and an angiogram, it was determined that Chris was a near to identical match to his sister. Three days later, he was admitted to the Victoria General Hospital site of the QEII Health Sciences Centre as a living donor.

Bonnie’s transplant was a success and for the first time in her life, her electrolytes, creatinine and blood pressure were all within normal levels. Her energy levels were restored and her 19 years of illness had finally ended.

“It is an indescribable feeling knowing this is all because of something you chose to do,” Chris said.

“Every day, I feel blessed knowing I helped my sister in such a way that changed her life so significantly.”

Chris’s hope is that more individuals continue to educate themselves on organ donation. He believes many people assume when they become a live organ donor, they may have to change their way of living; however, he wants them to know that’s not the case.

“The only reminder I have is a small scar and my sister still being here living life to her fullest,” Chris said. “It’s had zero impact on my life in terms of limitations; there have been no restrictions.”

Neither has experienced any health complications related to kidney donation.

“I have witnessed first-hand the difference organ donation can make in a life. I can only hope this story will inspire and encourage others to donate as well.”