Boosters 'take off' to Pictou Island 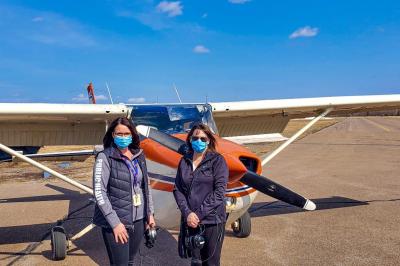 It was a chilly afternoon in March when a Truro Flying Club single-engine plane took flight from the Debert Airport. On board, Nova Scotia Health Northern Zone Public Health nurses (PHN) Angela Smith and Heidi Brown, along with enough COVID-19 vaccine to immunize an entire community.

Nestled in the Northumberland Strait between Nova Scotia and Prince Edward Island, Pictou Island has a population during the winter months of approximately 28 people. A popular tourist destination in the summer, the full-time residents were keen to get vaccinated against COVID-19 before the tourist season began. However, their geography posed a significant challenge to accessing vaccine, as the nearby Pictou ferry would not run in the icebound harbour until May.

Public Health, however, was quick to respond.

“It’s at times like this you see how well everyone works together,” said Susanne Landry, Northern Zone interim Public Health director. “Everyone quickly became involved, from leadership, Public Health staff, legal services, and members of the community to find a way to safely get our Public Health team onsite.”

Public Health nurses are no strangers to adapting to all types of environments and conditions, however the journey to the island was quite unique. Heidi Brown shared, “I asked the pilot, ‘where exactly are we landing this plane?’ He pointed to a dirt road. I said, ‘there is a car coming.’ His response: ‘they will move!’”

Upon arrival, Pictou Island’s only bed and breakfast, Inned of the Rainbow, opened its doors to the PHNs, serving as a vaccine clinic for the residents.

“The B&B owners were extremely accommodating, allowing us to use the common area as a registration and waiting area, and the administrative office to administer the vaccine,” said Angela Smith. “We were very thankful for their hospitality.”

As the nurses packed up their supplies before heading back to the plane, the residents invited them to return this summer to explore the beauty of Pictou Island. Only caveat: they will need to take the ferry!