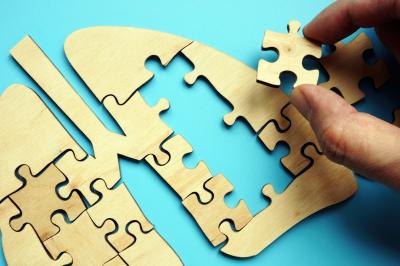 From a very young age, those living with Cystic Fibrosis are aware that they have a life-threatening condition, and that their future might be uncertain. A new drug that has been referred to as the biggest innovation in cystic fibrosis treatment is changing that. As of November 2021, Trikafta, developed by Vertex Pharmaceuticals, is available to Nova Scotians with cystic fibrosis for free through the province’s pharmacare program.

Trikafta helps defective Cystic Fibrosis Transmembrane Conductance Regulator (CFTR) proteins work more effectively through a triple combination of therapies. Two of the drugs in the treatment work as “correctors,” binding to the faulty protein and helping it fold correctly. This way, cells can shuttle more of the drug to the membrane instead of degrading it. The third drug is a potentiator – it binds to the CFTR protein and holds the channel open so that more salt can pass through it. With the combination of all three therapies, more CFTR protein reaches the cell membrane, and these proteins are more active and functional.

Nova Scotia Health’s research team in Respirology, which is supported by the organization’s Clinical Trials Unit within the Nova Scotia Health Innovation Hub, has been a key partner with Vertex Pharmaceuticals on clinical trials for cystic fibrosis treatments since 2010.

“We started with the first cystic fibrosis modulator drug, Kalydeco, which is one of the compounds that’s in Trikafta,” said Andrea Dale, respiratory therapist and researcher coordinator in Respirology. “After we did that trial, we moved on to several trials that combined other compounds with Kalydeco. Then we did a comparator trial for the compound that’s in Trikafta.”

“I think that people assume that all of this research takes place somewhere else – in the big centres like Calgary, Toronto or the United States,” added Dale. “But we keep getting asked back by Vertex, so that shows the quality of research we are doing and the data that we are delivering. I feel that the people that are sent here to monitor for us are really happy with what we do.”

Dale is responsible for coordinating and conducting the study visits with all of the Vertex patients. She works with Dr. Nancy Morrison, who has been one of the principal investigators for the trials.

“Dr. Morrison is very enthusiastic about doing this research,” said Dale. “She’s excited for us to be on the national and international radar, and have people know that we’re here, we’re a great site to work with, and we deliver the goods.”

“And our cystic fibrosis patients are extraordinary people,” added Dale. “Some of the phase two trials involved coming in weekly, with visits that were close to 10 hours long. They lasted three to four weeks and involved a lot of breathing tests (spirometry), blood work and EKGs, home monitoring and sweat testing. They are so compliant with what we ask them to do.”

Dale notes that when they moved onto the phase three trials, the appointments were still lengthy - probably five to six hours long - but eventually decreased to every 12 weeks. This phase lasted about two years and started as a placebo control, then became an openlabel extension, which means all the participants had access to the drug.

“I remember way back when we did the first trial with Kalydeco, this young girl who we didn’t know if she was on it or not,” said Dale. “So, she came in and we needed to do breathing tests on her. When she came back two weeks later it was amazing.”

“I remember handing her the spirometer to blow into,” continueed Dale. “Her whole body, the way she did it was different than just two weeks previously. I asked her if she felt any different, and she commented that she was never able to sleep on her side – she would wake up coughing and miserable – but the last three or four days she was waking up on her side and felt fine. We looked at her numbers and she started at 75% for her lung function, and that day she was 104%. That just doesn’t happen with cystic fibrosis.”

Dale noted that the drugs are generally well tolerated, and there’s not a huge number of side effects. Because it’s a clinical trial, patients are seen often and Research Coordinators like Dale have close contact with them in between clinical visits.

“There are phone calls in between clinic visits, and we’re doing blood work all the time, and checking their lung function,” said Dale.

Next up for Dale and the research team is to try Trikafta on cystic fibrosis patients who haven’t yet taken the drug, who will wear devices like a cough monitor and an activity watch to monitor their progress.

“Looking back at it, if this is the last set of trials I work on, I would say it’s a great way to end it. I can’t imagine anything better than this,” said Dale. “It’s just beyond what any of us thought would happen.”

Nova Scotia Health’s Clinical Trials Unit, as part of the Health Innovation Hub, is helping to make these kinds of good news stories possible by fostering strong and coordinated research efforts, enabling relationships like this, and contributing to the larger health ecosystem in Nova Scotia.