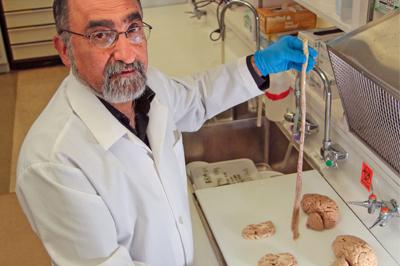 Halifax researchers are on the verge of launching the first-ever technology with the ability to definitively diagnose Alzheimer’s disease in a living person’s brain. “Until now, the only way to confirm this diagnosis was to have the brain examined by a neuropathologist after death,” says Dr. Sultan Darvesh, the NSHA-Dalhousie neurologist who is the brains behind the breakthrough technology.

For more than 20 years, Dr. Darvesh has examined the donated brains of healthy people and those who have died with dementia, looking for clues to diagnosing and treating Alzheimer’s disease. He established the Maritime Brain Tissue Bank in 1994 as a means of methodically storing and studying the brain tissues and health histories of their donors.

“We confirmed that an enzyme called butyrylcholinesterase, or BChE, accumulates in the plaques and tangles in Alzheimer brains,” says Dr. Darvesh, named Dalhousie Medical Research Foundation-Irene MacDonald Sobey Chair in Curative Approaches to Alzheimer’s disease in 2014. “When we found that it ignores similar plaques found in normal brains, we realized we had discovered a unique marker of Alzheimer’s disease.”

When Dr. Darvesh and his team found a compound that binds with BChE in the living brain and lights up in PET and SPECT scans to reveal the presence of Alzheimer-specific plaques, they partnered with BIOTIC to test the potential diagnostic technology in pre-clinical models of Alzheimer’s disease.

With the success of these Canadian Institutes of Health Researchand Brain Repair Centre-funded studies, Dr. Darvesh and BIOTIC moved on to planning MRI studies of people with Alzheimer’s disease—the next all-important step on the way to commercializing the technology.

“The lack of a tool for diagnosing Alzheimer’s disease in the living brain has led to the failure of all clinical trials for an anti-Alzheimer drug to date,” says Dr. Darvesh. “With a diagnostic tool in hand, we will have the means to see which drugs are working to halt or reverse the disease. Then we will have the diagnostic and therapeutic power to prevent an epidemic.”

As it happens, Dr. Darvesh has found that BChE plays an active role in the Alzheimer’s disease process. He’s working now with collaborators at Treventis Corporation to identify a compound that will block BChE and prevent Alzheimer from taking hold. Dr. Darvesh co-founded Treventis in 2010 as a vehicle for commercializing diagnostics and therapeutics for Alzheimer’s disease and other forms of dementia and runs the diagnostic arm of the company out of Halifax. Its therapeutic arm is based in Toronto.

“We have access to a large network of collaborators and investors through Treventis,” notes Dr. Darvesh. “After many years of laying the groundwork, we are really gaining traction now.”

One of only three well-established brain banks in Canada, the Maritime Brain Tissue Bank has received more than 1,000 brains, donated by people in the Maritimes affected by Alzheimer’s disease, dementia, ALS, epilepsy, Parkinson’s disease, multiple sclerosis, spinal cord injury, cerebral vascular disease, schizophrenia and other diseases of the brain and nervous system. It is an invaluable resource for the growing neuroscience research community in Halifax, as well as for researchers around the world, to probe the nature and causes of neurologic and psychiatric diseases.

A recent expansion of the brain bank, funded by Dalhousie Medical Research Foundation’s 2014 Molly Appeal, enables researchers to investigate the brain at the molecular level, revealing a wealth of crucial information about disease processes and how these could be influenced to stop disease. This is particularly important in the Maritimes, where the aging population faces an ever-growing burden of brain and nervous system disease.

For more information about the Maritime Brain Tissue Bank, and how to plan to make a tissue donation, visit: http://braintissuebank.dal.ca/