Every minute matters: Halifax Protocol produces better results for the ‘miracle’ of organ donation around the world 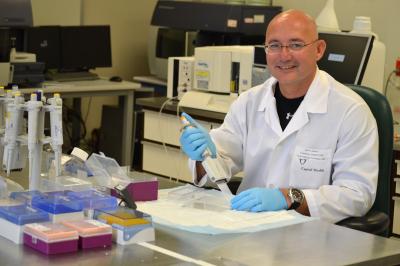 Just one donor can save up to eight lives. Yet many Canadians are still in need of organ donations – with 1,600 hopeful recipients added to the waiting list every year.

When the need is so great and resources are limited, ensuring accurate and timely matches are key.

How could standard techniques be updated and made more efficient? How could we provide better test results to improve patient care here in Atlantic Canada?

Before this new protocol, the established techniques to confirm matches between donors and recipients, developed decades ago, took hours to perform.

“If we were to receive samples in the lab right now, the first thing we would have to do is isolate cells,” Dr. Liwski said. “With the standard techniques that were available, it would take us around two hours just to get the cells ready and another two hours for the cross-match assay.* So we’re talking about four to five hours from the time that the donor cells arrive in the lab to the time that we can report the result to the clinical team.”

In these situations, every minute matters. As Dr. Liwski explained, “the longer the organs sit, the poorer the outcome for the patient.”

This is especially true for organs that have travelled from outside Atlantic Canada and await transplant in preservation solution.

By streamlining both the cell preparation and the assay, Dr. Liwski and his team have developed a technique to complete testing in less than half the time. Using what has been coined the Halifax Protocol, the medical lab technologists at the HLA lab are able to perform an entire cross-match in under two hours.

The new protocol equips every recipient with healthier organs, and gives the medical team, recipients and their family more time to get ready for surgery. The Halifax Protocol was implemented at the QEII in 2011, and an improved version dubbed Halifaster, in 2014.

Beyond the benefits that come with the saved time, Dr. Liwski’s method is more accurate.

“With the conventional techniques, you can get a false positive result for up to one in five tests,” he said. “This means patients are told they can’t receive an organ when in fact they could, and a healthy organ goes to waste.

“But in our hands, it happens less than one in 50 times. We’re very confident in our test results.”

Dr. Liwski’s cross-match protocol has been widely adopted. The benefits of this advancement are being felt not only by Canadians, but by recipients all around the world.

“We have a wonderful team of medical lab technologists here at the HLA lab, and without them, none of these life-saving tests would be possible,” Dr. Liwski said.

Much of the refinement of the Halifax Protocol came from their experienced feedback.

“They’re the ones on the frontline – performing the tests and talking with the coordinators every day,” he said. “Their input was an important part of the development of the protocol.”

While he is highly involved in the organ donation process, the wonder is never lost on Dr. Liwski.

*assay: a procedure for measuring the biochemical or immunological activity of a sample.