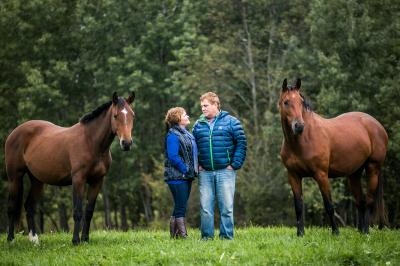 Note: The below article was first featured in the NSHA Research Annual Report for 2015.

It didn’t take Lorraine Rawlins of Falmouth, N.S., long to decide to enroll her husband, Kevin Crosby, in an international trial of a new medication for reversing organ failure in severe sepsis.

“He was intubated, in a coma, with medication ports in his neck, arms and wrists,” recalls Rawlins of Crosby’s first day in the Intensive Care Unit at the Halifax Infirmary.

“Everything was happening so fast, it was hard to know what to do. The research coordinator carefully explained that not only might the drug save Kevin’s life but being in the study would mean extra sets of eyes monitoring his care. My daughter and I quickly decided it was the right thing to do.”

Crosby had developed sepsis in the aftermath of a terrible tragedy. On June 15, 2015, he and Rawlins were awakened in the night by a neighbour pounding on their door, shouting that their barn was on fire.

Crosby—a long-time horse breeder, Grand Prix rider and riding coach, and co-owner of Crosby Stables—ran out in his housecoat, intent on saving the eight horses that were stabled there that night.

He was met with a toxic wall of smoke and flame and could only release one mare before he was forced to flee. He jumped on a tractor and drove it through a barn wall to free another mare and her foal, but by then he had burns on his face, head, hands and back and the barn was engulfed in flames.

“We lost five horses, including our breeding stallion and a pregnant mare that night,” says Rawlins. “Thankfully most of our 30 horses were out in the pasture, but it was still a heartbreaking loss and a major blow to our business.”

Crosby cleaned his burns and applied a topical antibiotic, but one week after the fire Lorraine found him unresponsive. She called 911. The paramedics found his condition so poor, he was rushed to the QEII Health Sciences Centre Halifax Infirmary.

“We approached Kevin’s family about the trial when he started developing coagulopathy, which is when the blood clots abnormally in response to infection,” explains Lisa Julien, team lead and research co-ordinator with NSHA Critical Care Services. “The drug we were testing is designed to reverse coagulopathy to protect the organs from failure.”

It’s a challenge to approach families for consent to participate in research when they’re in crisis, but thanks to her calm, direct manner and years of experience, Julien routinely secures the participation of 95 per cent of the families she talks to about enrolling in clinical trials.

“It can take an hour or more to cover all of the necessary information,” she said. “I’ll meet with them several times, give them time to think, and answer all their questions to make sure they understand everything involved.”

“Lisa approaches people with confidence and sensitivity,” notes Dr. Rick Hall, an NSHA anesthesiologist and Dalhousie professor who’s been a Canadian leader in critical care research for 20 years. “The good people of Nova Scotia most often choose to take part in the research, in the worst moments of their lives, in hopes of helping their loved one but also because they understand the larger benefit to society.” Thanks to research and steady improvements in care, sepsis death rates have dropped from 40 per cent to 26 per cent in the 20 years Dr. Hall’s been involved.

“There are no new antibiotics and there will never be one magic bullet for sepsis,” he says. “There will always need to be a combination of supportive therapies to keep people alive while we fight the infection.”

In Crosby’s case, a streptococcal infection in his bloodstream put him into septic shock, on the verge of multiorgan failure. After he developed blood clots and had emergency surgery to take out his failed and infected gallbladder, he had to be removed from the study.

But, he had already received four of six doses of the study drug or placebo. “We feel he was most likely on the study drug and that’s why he’s alive,” says Rawlins. “We’re looking forward to finding out in a few months when the trial is over.”

Julien will continue to follow Crosby until his ordeal is a year in the past. He doesn’t remember running into the fire to save the horses or his time in the hospital, but he was delighted to meet Julien when she travelled to Crosby Stables to do his first post-discharge checkup.

He now speaks with her on the phone monthly, in keeping with the study protocol.

“I know I’m getting exceptional care from being part of this study,” Crosby says. “It’s been a very painful and difficult road, on a whole lot of levels, but we’re moving forward now. It’s great to have that ongoing support from Lisa along the way.”