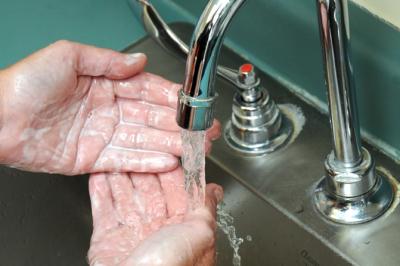 ‘Tis the season for cold and flu bugs and stomach bugs.

With the holidays around the corner, it’s important for people to make regular and thorough hand washing part of their routine.

“Frequent hand washing can reduce the chance of infection and transmission of influenza, gastrointestinal illnesses and other illnesses like colds,” says Donna Lahey, head nurse of the Infection Prevention and Control Department in NSHA’s Eastern Zone. “It’s important for everyone – health-care workers, hospital visitors and the public – to wash their hands, particularly during this festive season where people will be taking part in a lot of social gatherings.”

One particularly nasty group of illnesses that shows up this time of year is gastrointestinal illnesses. Many different viruses can cause gastrointestinal illness, including rotaviruses, adenoviruses, caliciviruses, astroviruses and noroviruses. These common viruses can live on any surface and cause an inflammation or infection of the stomach and small and large intestines.

Gastrointestinal illness is often called the “stomach flu,” even though it is not caused by flu viruses. The symptoms of gastrointestinal illnesses include nausea, vomiting, diarrhea and stomach cramps. They can also include a low-grade fever, a headache and achy limbs.  Symptoms generally begin 1 or 2 days after contact with a virus that causes gastro illness. The illness may last one day to 10 days, depending on which virus causes it.

“The holidays are a great time to socialize,” says Lahey. “People gather at parties, Christmas concerts, visits with friends and family and go to other social events. While these gatherings are great for spending time with people, they’re also the perfect setting for gastro bugs which thrive in social settings.”

The holidays also happen to fall in the middle of flu season. The flu virus is easily spread by droplets caused by sneezing and coughing. Flu symptoms have a sudden onset and include high fever, severe headache, respiratory discomfort, aches and pains, fatigue, congestion and heavy cough. People should contact their family physicians if their symptoms change, worsen or last more than five days.

“People are always busy and on the go this time of year, more so than others,” says Lahey. “Because of this they sometimes forget to take care of themselves and as a result, may become run down. That makes them susceptible to colds, flu and other illnesses.”

While healthy people recover from these illnesses relatively quickly fashion, they can have a greater impact on young children, the elderly or people with weakened immune systems or chronic illnesses including hospital patients and continuing care residents.

The most important tip to limiting the spread of most illnesses is handwashing, says Lahey.

“Wash your hands regularly and thoroughly after you’ve used the washroom, before you prepare or eat food and after you’ve sneezed or blown your nose.”

Tips to Limit the Spread of Gastro Illness:

Tips to Limit the Spread of Flu: