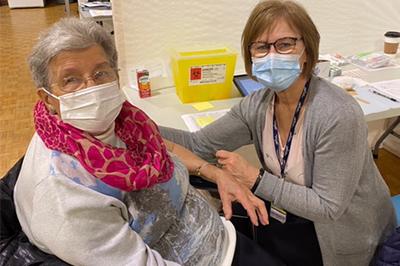 Margaret Bennett, licensed practical nurse, discovered an unexpected connection to her mom on March 18 while working as an immunizer at the St.FX Community Vaccine Clinic.

Margaret’s mom Beatrice (AuCoin), who passed away in 1989 at the age of 62, had long told her children of her fond memories of living and working in Pomquet, where she took her first teaching job in 1947.

Beatrice had boarded with a family in Pomquet and often spoke of how much she enjoyed her stay and how kind the people were.

She then returned to her home community of Margaree, where she pursued her teaching career, married and raised four children.

Having received a diagnosis of lung cancer a year after retiring, Beatrice never returned to visit Pomquet.

Early on March 18, “A gentleman sat at my station and after some chatting discovered I was from Margaree and he was from Pomquet,” said Margaret. “He remembered my Mom and said his sister (Rita Landry), who my mother boarded with while teaching in Pomquet, would be coming later in the morning for her vaccine.”

“Rita was so glad to connect and we chatted about when my Mom lived with her and the fond memories Rita had of my Mom. She asked me to come visit at her house so we could get caught up. Both our hearts were overflowing!”