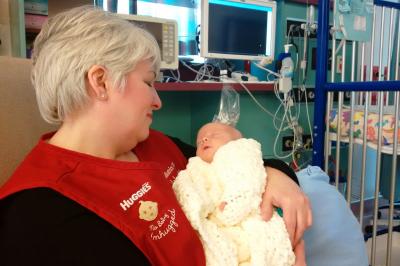 Judging by the content look on little Dominic DeBow-Howell’s face, you’d never guess he was in such a hurry to be born.

Seven weeks before his due date, Dominic was born at the Cape Breton Regional Hospital. Weighing only four pounds and four ounces and experiencing complications from his early arrival, Dominic was admitted to the hospital’s neonatal intensive care unit (NICU).

For his mom Sylvia DeBow, who also has two young children at home in New Waterford, leaving her baby in the hospital was a hard thing to do.

“I was worried about him feeling all alone when I couldn’t be here,” she says. “Then I learned about No Baby Unhugged and that made me feel better, more confident and less worried.”

The “No Baby Unhugged” program is a partnership between the hospital, Huggies Canada and the Canadian Association of Paediatric Health Centres (CAPHC). It’s the first partnership of its kind in Canada. Through the program, volunteer huggers cuddle and hold babies when parents aren’t able to be with them whether for medical reasons or because of distance or family commitments at home. The program is also in place on the hospital’s pediatric unit.

Mickey Daye, manager of maternal child services at the hospital says the program has many benefits.

“When babies are hugged, it stabilizes their heart rate and temperature,” he says. “Hugging helps them sleep; it improves their oxygen level and helps them gain weight. Emotionally, hugging calms them, soothes them and lets them know they are safe and cared for. When a volunteer starts hugging a baby, you see a difference in that baby immediately.”

It’s not only the little patients who benefit from the program. The volunteer huggers benefit from it as well.  With 16 active volunteers, the program is at capacity. There are almost 100 people on the wait list to volunteer. Elaine Cuff of Howie Centre is one of the program’s volunteers. She usually comes in for at least two hours on Saturdays. Some of her shifts are longer. It all depends on what the baby needs.

“I don’t have children so it’s my grandma time,” she says. “It gives me patience. I’m going 100 miles an hour all week but on Saturdays, it’s just me and the babies. It’s calming for me too.”

The day before his actual due date, little Dominic is ready to leave the hospital. He weighs six pounds and 10 ounces. His sisters, Katie, 4 and Kairi, 2, are looking forward to having their brother home.  For his mom Sylvia, the peace of mind “No Baby Unhugged” gave her cannot be measured.

“I know he would’ve had to stay in the hospital a lot longer if it hadn’t been for the program,” she says. “It was the care and affection the volunteers and staff gave him when I wasn’t here that helped him get well so quickly.”

For more information on No Baby Unhugged go to www.nobabyunhugged.ca