A lasting gift: Quality and patient safety leader Denice Klavano says late son’s decision to donate is true ‘legacy to how he lived’ 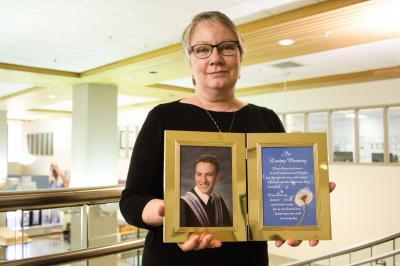 Denice Klavano sits in her office at the Halifax Infirmary, where she works as a quality and patient safety leader with patient relations for Nova Scotia Health Authority (NSHA). A stained glass ornament in the shape of a green ribbon, a symbol for organ and tissue donation, hangs from the cork board above her work station.

Her son, Brad Howell, died tragically as a result of a fork lift and army motor vehicle collision in March 2006. He was just 18 years old.

Klavano and her family made the decision to donate Brad’s tissues – a wish she wanted to honour for her son, who had just registered as a donor earlier that year.

“Brad was working his way through university as an army reservist with the Princess Louise's Fusilliers in Halifax,” she explained. “He thought he may be a search and rescue technologist or a police officer someday. He was always looking to serve and help people. That’s just what he did.”

Before her current position as patient representative, Klavano worked with NSHA’s Regional Tissue Bank. As a result, Klavano and her four boys often discussed what it meant to be an organ and tissue donor and what it could do for people who were in need.

When Brad’s new health card came in the mail, Klavano said he was eager and proud to sign it.

“It was the first time that he was old enough to make that kind of decision for himself,” she recalled. “When I asked him if he was going to sign it, he smiled, pointed to himself and said: ‘Of course mom. This is just a rental.’”

Though it doesn’t change the profound loss, Klavano likes to remind herself that Brad’s choice to donate went on to change the lives of many. It’s a reality that didn’t quite hit her until she received a letter from one of his tissue recipients months later.

“That letter communicated the impact of his gift in a way that nothing else ever could,” said Klavano. “To know that someone is living and doing something they could never have done without the help of my son is a really special feeling.”

For someone who has endured what would be considered a mother’s greatest fear, Klavano continues to push forward, remain positive, and celebrate the memory of her son and the gift he so selflessly gave.

“Brad being the kind of person he was, there would be no better legacy to how he lived than to pass on life, mobility or vision onto another person. It doesn’t make grief easier, but it does shine light on some of the darker corners of it.”

After 13 years, Klavano continues to share Brad’s story in hopes of inspiring others and promoting the importance of organ and tissue donation. She’s gone on to present as a keynote speaker for many groups, associations and organizations locally, across Canada and beyond.

As a health care professional, Klavano says she wants to help staff feel more comfortable speaking with families during difficult times. As a mother and someone who has lived it, she’d like to see a more open dialogue around the topic, making it an everyday conversation for everyone.

“People tend to not talk about donation because that means they have to talk about death,” said Klavano.

“If conversations aren’t had or families aren’t asked, then the decision is made for that person. Make your decision known. A choice made out of the purest intentions to help a complete stranger in need will only yield one result – love. Not just for the recipient but for everyone involved.”