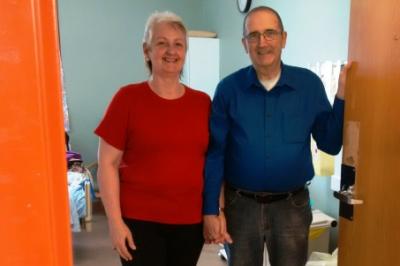 Falardeau & Gauthier just prior to discharge from the QEII.

Robert Gauthier is looking forward to being able to pick up his grandchildren. He also plans to buy a new bicycle.

Gauthier, 67, has long suffered from ventricular tachycardia, a rapid heartbeat that can cause sudden death. He underwent a groundbreaking procedure on his left ventricle Sept. 1 at the Queen Elizabeth II Health Sciences Centre in Halifax to extend both the quantity and quality of his life.

I couldn’t do anything,” Gauthier said of life before the complex procedure called ablation, his wife Nicole Falardeau at his side, just before being discharged from the QEII. “I could lose consciousness at any time. I lost consciousness once while driving.”

During the procedure, which included the use of an innovative catheter with an extendable needle, Dr. John Sapp and his team of doctors inserted wires into Gauthier’s heart to cauterize the short circuits that had been causing abnormal rhythms.

“His heart was out of rhythm as we began the procedure, and within a few minutes we could see that it was coming from deep inside the heart muscle,” Dr. Sapp, a cardiac electrophysiologist, said in his QEII office a couple of days after successfully treating Gauthier, who travelled from Quebec City for the unique treatment.

“Once we inserted the needle into the heart muscle, we could see it was coming from that deep area,” Dr. Sapp explained. “And when we made that deep burn, it went back to a normal rhythm and then we couldn’t bring on the short circuit anymore.”

The ablation Gauthier underwent in Halifax was different than three past attempts made to treat the abnormal rhythms in his heart. Dr. Sapp, along with mentor Dr. William Stevenson, has led the development of the new ablation catheter, which extends deeper into the heart to cauterize short circuits that are harder to reach.

“It would have been something aggressive – open heart surgery and trying to cauterize the arrhythmia circuit,” he said.

Gauthier is one of only nine patients who have been treated using the catheter Dr. Sapp has helped develop. All of have undergone this form of ablation under his care at the QEII Health Sciences Centre. His other patients have come from Nova Scotia, across the country, south of the border and even as far as Europe.

The other options for treating Gauthier would have been much more invasive, the doctor explained.

Currently, the new catheter is only available through compassionate release, so is only used “when other things aren’t working,” Dr. Sapp said. “We’ll give it a try when it’s important to; (when) the patient really needs something done, and usual therapy hasn’t worked.”

Dr. Sapp soon heads to Brigham and Women’s Hospital in Boston, to work with Dr. Stevenson and complete an ablation that will use the new catheter for the first time on a patient in the United States.

“It’s really gratifying to see that you can make a difference, especially in a circumstance where other things haven’t worked,” Dr. Sapp said.

“If this does turn out to be something useful in a wider context, it would be nice to be able to develop something that’s going to help (even more) people.”

Gauthier, meanwhile, is now back in Quebec, taking fewer anti-arrhythmic medications and making the most out of his healthier life.

“It’s a new life, a new beginning – for him and for me,” Falardeau said.

“I want to buy a bicycle next spring; get my body into shape,” Gauthier said of his plans for the future, adding he can’t wait to play with his grandchildren. “I’ll be able to pick them up, without being scared to watch myself (and wondering), ‘what if I faint? ‘ ”

The couple credits Dr. Sapp and his Halifax-based team for saving his life.

“A week ago, I was always worrying about what’s going to happen,” Gauthier said. “Now I’m looking forward to what I’m going to do.”