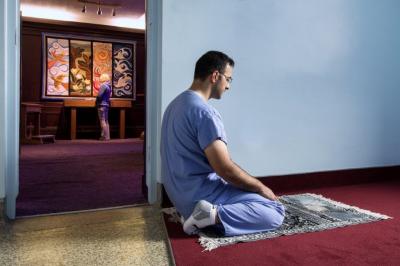 “World Interfaith Harmony Week celebrates the principles of tolerance and respect for the other that are deeply rooted in the world’s major religions. The observance is also a summons to solidarity in the face of those who spread misunderstanding and mistrust." – Former Secretary-General Ban Ki-moon, United Nations

There are many examples within NSHA of work to celebrate, respect and unite different cultures, faiths and belief systems:

Enabling “more opportunities for openness and engagement”
Camp Hill resident E.V. Shriver wrote the following letter to the editor, which appeared in the Dec. 1 issue of The Chronicle Herald. It demonstrates clearly the value of interfaith harmony. “Each Sunday, as a resident of Camp Hill I choose to attend the Sunday morning Protestant worship service. Most of us use wheelchairs and walkers so we need help to get back and forth to the chapel.

“A team of volunteers escort us back and forth. Among the team are two young women wearing the Muslim women’s head covering, the hijab. They are often joined by another Muslim volunteer, a male. “I have pondered for some time the impact these Muslim volunteers have had on me personally. I see much positive in its intent and actions. It is a simple example of two faiths meeting and discovering a commonality of service which reflects a spirit of giving and receiving.

“The character of this Christian-Muslim co-operation is a strikingly sharp contrast to recent anti-Muslim outrages such as in Calgary and Montreal. This shows interactions between religions don’t always lead to conflict, but can produce co-operation. “We need more opportunities for openness and engagement to discover our shared values and humanity.”

Ms. Peace* was a 60-year-old woman who was actively dying. She was very connected to her Aboriginal traditions. It was very important to the family to honour her cultural and spiritual traditions. For some Aboriginal traditions, it is very important to have the window open when a person is actively dying. Hospital windows are locked for safety reasons. Regardless, the nursing team called maintenance to see if they could assist in honouring their tradition by opening the window, and they were able to do so. By attending to the spiritual and cultural needs of this patient, the health care team was able to provide the family with a sense of comfort and peace knowing that their spiritual and cultural traditions were honoured. Further, they were pleased to know that their mother was honoured in her wholeness, allowing the patient to die with dignity.

*Not the patient’s real name

Learning about diverse faiths, belief systems and experiences
The Spiritual Care Program at Valley Regional Hospital, working closely with the Social Inclusion and Diversity Committee and with funding from the Department of Health and Wellness and the Valley Regional Hospital Foundation, hosts annual conferences for health professionals throughout the province. These conferences, focused on better meeting the spiritual and cultural needs of patients and families, are also open to community partners such as universities, colleges, VON, community clergy and spiritual leaders. Conferences have covered a range of topics, including:

• spiritual and cultural care at end of life

• attending to spiritual and cultural needs while in hospital

• attending to the needs of gay, lesbian, bisexual and transgender people at end of life

• the history of Aboriginal People in Canada, including the impact of colonialism and residential schools on health

Creating environments that respect and invite diverse beliefs
Several facilities within NSHA have worked to make sacred spaces more inclusive of diverse faiths, religions and beliefs. Many of these spaces now include Muslim prayer mats, Koran, Christian Bibles (in different languages), Hebrew Scriptures, Buddhist prayer books, meditation cushions and more. Strengthened relationships with the Mi’kmaq community have resulted in the use of traditional medicines for patients in some areas, and prayers in Mi’kmaq, as well as the exemption of smudging from the tobacco-free policy.

If you have a story that demonstrates interfaith harmony within NSHA, please share it with us by emailing NSHAnews@nshealth.ca.