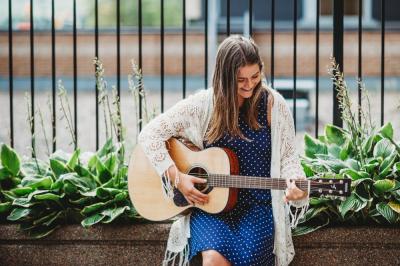 Kelsey MacDonald can often be heard in the hallways on the fifth floor of the Aberdeen Hospital in New Glasgow, Nova Scotia.

For the last two years, she has been a music therapist at the local hospital.

MacDonald offers music therapy interventions to patients in palliative care, the alternative level of care unit and the pediatric rehab.

Music Therapists like MacDonald use music in a therapeutic relationship to achieve a goal. They will choose a patient’s preferred music and adjust based on their responses to the music.

“We have many different pathways in our brain, such as motor, language, sensory and emotional to name a few. If the language center of the brain is damaged, this doesn’t necessarily mean that the music pathway is broken as well,” said MacDonald. “This is why when a patient with dementia who has difficulty speaking, can often sing a song from their childhood without fault.”

MacDonald’s decision to become a music therapist wasn’t a surprising one.

As a child, you could always find her singing or playing the piano.

She knew she wanted to incorporate not only music in her career, but she also had a passion for helping people.

When she found out about music therapy, she knew it was the perfect fit for her. This led her to pursue a Bachelor of Music Therapy at Acadia University.

MacDonald acknowledges that music therapy can be an untraditional career choice. However, the support she has received from her coworkers, patients and families helps her to know she made the right choice.

“Staff have been very supportive of music therapy and its benefits. They are great advocates of the program and I appreciate all of their support.”

MacDonald recalls a time where music therapy has helped a palliative care patient of hers in the past.

“I worked with a patient who was experiencing restlessness and agitation. The patient was nearing the end of life and unable to settle. After entering the room, I began to play his favourite song and he immediately stilled. I continued to sing until he laid back in bed and appeared to fall asleep. This created a calming environment not only for the patient but for the family members. Before I left, his brother said to me that he wouldn’t have believed it unless he had witnessed it.”

This highlights how music therapy can have a positive impact on a person’s well-being at any stage of a life and shows how it can be used in a health care setting.

MacDonald is grateful for the opportunity to pursue her dream career in her home province.

“I am grateful for this opportunity to bring music therapy to people who may not be aware of its benefits in a rural area.”