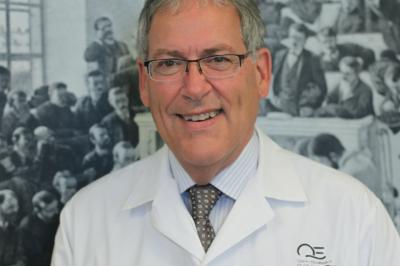 Dr. David Kirkpatrick is a head and neck surgeon, chief of surgery for NSHA central zone and the QEII Health Sciences Centre, and physician lead for the QEII Redevelopment Project.

While playing a crucial part of the QEII Redevelopment Project’s leadership team goes hand-in-hand with his role at NSHA, he has a personal attachment to the project as well: the VG site of the QEII Health Sciences Centre is the doctor’s home away from home.

“I grew up at the VG,” said Dr. Kirkpatrick. “When I walk in there and smell the place it smells likes home. I was one of the last people to embrace replacing it, but it’s an old building and it [has] reached the end of its useful life.”

And as chief of surgery, he has witnessed both the effects of the Centennial building’s aging infrastructure and the challenges these failures pose to care delivery first-hand.

“In terms of all the patient care services, much of surgery’s infrastructure elements are not transferable,” he explained. “The clunky bits like operating rooms where surgery occurs – you can’t just simply decide to do that in another part of the hospital.”

One of the early hurdles of the project was determining whether the Centennial and Victoria buildings could be overhauled by major renovations or if the services they housed should be moved elsewhere and the buildings demolished. Ultimately it was decided the latter was the best – and most feasible – option.

“The main reason we need to get out of the VG is because the building is failing, but it’s also now obsolete in its design and function,” said Dr. Kirkpatrick. “How we deliver patient care has changed vastly over the past 50 years. We realize now that it makes more sense for [operating rooms] to be on a level where you can transfer the sickest patients to and from them easily. Bringing these areas together in the new builds will improve patient safety and the quality of care we deliver.”

Ensuring the project’s new infrastructure doesn’t find itself becoming quickly obsolete was a task that Dr. Kirkpatrick challenged clinicians to consider. He asked them to envision what their specialties might look like years into the future.

“We’re planning for the future and future-proofing. We need to make the new facilities flexible enough that when changes do occur in the future you can easily update the facility,” he explained.

“While born out of necessity, this project presents a huge opportunity to reimagine health care, improve the patients experience and build what’s necessary to fulfill this vision – from the ground up.”

Because of the very nature of the specialized care offered at the QEII and how care has evolved from a mainly independent practice to be more collaborative and team-based, it is now crucial for care areas with interdependencies to be co-located in the new builds for an improved patient safety and better overall care environment.

“By moving to co-located care programs, physicians and clinicians will practice more integrated care and patients will experience improved continuity of care.”

The QEII Redevelopment Project’s master plan is currently being reviewed by NSHA and its partners, the Nova Scotia departments of Health and Wellness and Transportation and Infrastructure Renewal. It’s expected to be submitted to the Government of Nova Scotia for approval shortly.

Dr. Kirkpatrick feels confident in the future of the VG and Halifax Infirmary sites of the QEII. “The visions that the architectural teams are coming up with are quite exciting. There’s a respect for the community and respect for environment, with more natural light to promote health and healing,” he said.

“We’re hoping to create a campus that will be a nice place for people to spend time with their family members.”

He continued, “the QEII Health Sciences Centre serves as the Halifax hospital, the provincial tertiary hospital, the Atlantic quaternary hospital and it’s married with our academic training and research centres: medical schools and schools of the other allied health professions. It is the foundation for a very robust and effective university health system. I think when [the project is] finished it will serve our community very well.”