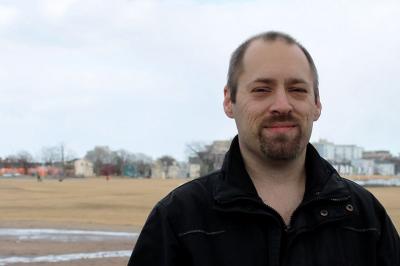 Ryan Deveau is back to work and doing well after taking part in gene therapy for Fabry disease (Amy Wilson, NSHA Research and Innovation).

After a lifetime of living with the effects of Fabry disease, Ryan Deveau is looking forward to the possibility of permanent relief. He is the fourth person in the world to take part in a Canadian phase-one clinical trial of gene therapy for Fabry disease.

“It’s like a miracle,” said Deveau, several months out from treatment. “I’m producing my own enzymes and may be able to stop the intravenous enzyme therapy I’ve been on since 2007.”

Fabry disease is a genetic disease that prevents the breakdown of certain fatty materials, due to the absence of a cellular enzyme called alpha-galactosidase.

“This fatty material accumulates in the brain, kidney, heart and other tissues, causing pain, nerve damage, heart and kidney disease, strokes and other problems,” noted Dr. Michael West, the nephrologist who approached Deveau to enroll in the gene therapy trial funded by the Canadian Institute of Health Research (CIHR) .

“Everything changed for me once I started the enzyme replacement therapy,” recalled Deveau. “Before that, even normal physical activity caused a lot of nerve pain; it wasn’t possible to manage the upkeep to own a home. Now I own a home and am married with two kids.”

The gene therapy process is complex.

First, Deveau took medications to move his stem cells into his blood, so the cells could be harvested for the procedure. The stem cells were flown to Ontario, where a virus was used to put a working copy of the gene that codes for the missing enzyme into the cells. The modified cells were frozen and shipped back to Halifax to be transplanted into Deveau, who by then had received chemotherapy to knock down his own blood cell production to make room for the transplanted stem cells to graft into his bone marrow. So far, the procedure has restored enzyme production in Deveau and the other participants.

If larger-scale trials bear out the preliminary success, gene therapy could become the new gold standard for treating Fabry disease.

This article was originally published in Research Focus on Nephrology - Spring 2019 (PDF).