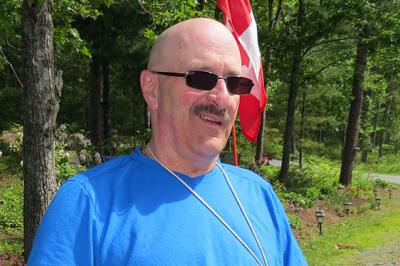 It was a police officer who first recognized Roger Doucet’s tell-tale facial droop and took him to the hospital, where a brain scan confirmed he had had a stroke. By then, it was too late for some of the time-sensitive treatments that may have reduced the severity of his stroke, which left him without the use of his left arm and leg.

Despite having many of the classic warning symptoms that day in 2012, Doucet didn’t know he was having a stroke. Although he was feeling a bit weak and disoriented when he woke up that morning, he headed out to his favourite coffee shop. There, he hit another car in the parking lot and he fell when he got out to exchange information with the other driver.

When a police officer arrived to take his statement, Doucet was dizzy and confused. But, even then, he didn’t know he was having a stroke.

Doucet spent a month in hospital, followed by several weeks in the Nova Scotia Rehabilitation Centre in Halifax. He then recovered at the Centre for Restorative Care in Lunenburg before moving into an assisted living facility.

Stroke is a leading cause of death and disability in Nova Scotia. Yet, not recognizing a stroke is a common problem that can lead to worse outcomes for patients.

“Roger isn’t alone. There are still many people who don’t recognize the signs of stroke or know what to do when they see them,” said Linda Sears-Doucet, the stroke program co-ordinator with Nova Scotia Health Authority on the South Shore.

“Many people take a ‘wait and see’ approach when they are having symptoms. This wastes valuable time. Recognizing and responding immediately to the warning signs of stroke can significantly improve survival and recovery,” she says.

“Don’t delay. Get medical attention right away. The quicker you act the more of the person you can save.”

To support people getting help faster, the Heart and Stroke Foundation of Canada recently adopted the “FAST” program to help anyone having or witnessing a stroke to recognize the signs and act quickly. FAST is an easy way to remember the major signs of stroke. It stands for:

The adoption of “FAST” is the result of a comprehensive process that included a review of international best practices for signs of stroke campaigns, and the help of experts in the fields of neurology, psychology and marketing. Countries around the world that have been using FAST are seeing positive outcomes. The acronym and the four quick checks are easy to remember and direct people to call for emergency assistance right away.

“Call 911 or get medical attention for these symptoms, even if they are temporary and only last a few minutes. With stroke, every minute counts,” said Sears-Doucet, who is part of an interdisciplinary stroke team at South Shore Regional Hospital.

The team, which includes the coordinator, a physiotherapist, occupational therapist, dietitian, social worker, speech-language pathologist, nurse and the patient’s physician, sees between 80 and 100 strokes per year at the Regional Hospital.

Today, Roger Doucet continues to focus on his recovery in the community, doing physiotherapy twice a week to work on mobility and build muscle.

He has regained some use of his left leg and can walk short distances using a cane, and he recognizes the benefits getting help sooner would likely have made.

“If you have symptoms, it is important to get help right away,” he says.