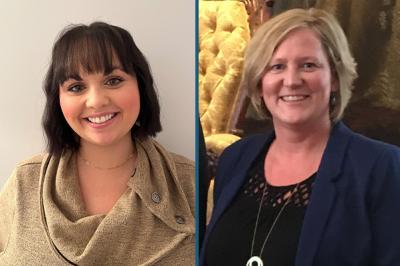 From registered nurse, Alisha Webb’s, perspective being busy when she is on call is a good thing. For some health care staff, wishing for a quiet on-call shift is the norm, but when Webb is called into action as a Sexual Assault Nurse Examiner (SANE) – she is grateful knowing someone is reaching out for help.

“The people seeking out our services are often in a very vulnerable state, but more importantly – they are incredibly strong and brave for reaching out,” said Webb who works as a SANE on top of her full-time role as an RN in Western Zone with a psychosocial rehabilitation program for individuals with severe and persistent mental illness.

The Nova Scotia SANE program is comprised of registered nurses who have completed specialized education and clinical preparation in medical forensic care for those who have experienced sexual assault.  SANEs provide an immediate response to people who would like supportive care, including medical attention, information about resources, as well as the option to have forensic evidence collected within seven days of a sexual assault. The Nova Scotia community-based SANE program has several teams of SANEs, most of whom work full-time or part-time in other diverse areas of health care throughout the province in addition to on-call work with the SANE program. To learn more about the community-based service providers operating the SANE programs for Nova Scotia Health and how to access support, visit nshealth.ca/sane.

“I’ve been working as a registered nurse for just under five years now and became interested in the SANE program during my nursing studies when we had a guest speaker from the program present in one of our classes. After I started working as a nurse, I had a colleague who was already a trained SANE, listening to her speak about this work really inspired me to get involved,” said Webb.

“One of my favourite things about nursing has always been the connection with individuals and being able to offer support and comfort in moments of vulnerability. My ability to provide this support has been extended thanks to my training as a SANE,” added Webb as she spoke about finishing her SANE training in December 2021.

Susan Wilson leads the SANE program provincially as the Director of Violence Prevention, Intervention & Response with Nova Scotia Health. Wilson serves in a leadership role with the SANEs and SANE service providers through education, training and development for those coming into this work. Wilson also leads SANE program expansion across Nova Scotia through implementation support and the development of policies in collaboration with the community-based SANE service providers, local SANE Coordinators, her colleagues within the healthcare system as well as government and non-government partners, helping set standards for best practices and response to violence across the province.

"The impact of gender-based violence is far more widespread than the experience of a single individual. This issue impacts families and the community, it is directly related to public health and the safety of our communities,” said Wilson as she described the significant role of the health care system in the elimination of violence against women through education, policy development and supports and services. “We also have lots of work to do in health care to better understand this issue. Work we are committed to doing,” added Wilson.

The SANE program has been able to expand significantly over the past two years, even through the challenges of a global pandemic and that work continues with new growth opportunities on the horizon.

“We are in the process of building capacity to strengthen response to violence across the health system, with a more immediate focus on domestic violence” shared Wilson. “The work of SANEs will also be expanding to include response to those experiencing domestic violence in the near future.” An estimated twenty to thirty per cent of cases in which Nova Scotia SANEs currently provide response involve reports of sexual assault by a domestic/intimate partner.

December 6 is the National Day of Remembrance and Action on Violence Against Women, in honour of 14 young women who were murdered at Polytechnique Montréal (December 6, 1989). This day occurs amid the 16 Days of Activism Against Gender-Based Violence, November 25 to December 10, an annual campaign that is used as a rallying cry around the world to call for the prevention and elimination of violence against women, girls, and 2SLGBTQI+ individuals.

“These days of activism are a call to action to take a stand against gender-based violence by addressing the beliefs and behaviours that perpetuate violence,” said Wilson. "Reflecting on the meaning of the National Day of Remembrance and Action on Violence Against Women, it's about remembering those who have experienced gender-based violence and those we have lost to it. Also honouring the nearly 100 Sexual Assault Nurse Examiners, five community-based SANE service providers, and all who work tirelessly in this work across Nova Scotia each and every day – thank you for your incredible work and commitment in addressing this issue and supporting those who experience gender-based violence."