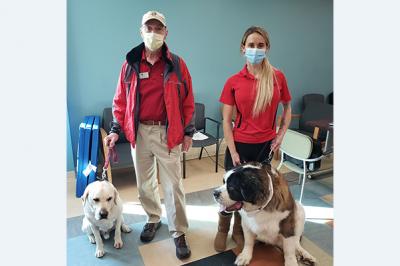 Needles are absolutely terrifying for some people. And in the world of COVID-19 vaccines – and now boosters – that terror poses a real challenge for those who want nothing more than to be protected.

A Dalhousie Family Medicine clinic in Spryfield recently teamed up with Nova Scotia Health Public Health to help guide patients through the anxiety of staring down that COVID-19 vaccine needle. And they did it with a little help from some cuddly canines with St. John Ambulance’s dog therapy program.

Dr. Karen McNeil is a family doctor at the Spryfield clinic. The idea of a vaccine outreach clinic for people with needle anxiety came after discussions with some of her patients. “My special interest is in adults with intellectual and developmental disabilities,” McNeil said. “I had a few adults who were having a lot of anxiety around COVID-19 shots, and they really wanted the shots.”

McNeil said some of her patients had tried multiple times to get the shot, but ultimately left without getting vaccinated. That’s when McNeil thought of introducing dogs to the equation.

“Animals are very therapeutic and not only offer a distraction but can offer some solace to people who are anxious. It’s well documented in the literature that animals are calming to people and so the idea was to bring them in for these gentlemen.

“But then the thought occurred to me that there were other people out there who were also struggling and really wanted it,” McNeil said. 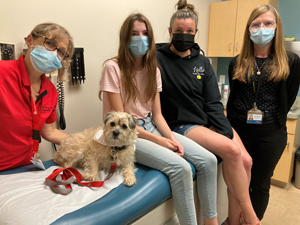 From there, McNeil said Public Health ran with it. “I can’t say enough good things about Public Health. They are definitely ‘out of the box’ thinkers. They are a well-greased machine when it comes to rolling out vaccines. They come in with their vans, it all spills out into this clinic, and then it all packs up and goes on to the next spot.”

The call went out to some patients McNeil knew could benefit from a clinic of this kind, but it was also opened up to walk-ins.

Two dog therapy vaccine clinics were held in Spryfield this fall, with a total of 56 participants. Not all the patients were successful in overcoming their anxiety, but McNeil said the dogs definitely helped.

“I can think of a few people who came in, very anxious, visibly anxious. And you know it wasn’t their first try. And just either having the dog on their lap or if the dog kind of snuggled up against them, they just got the vaccine,” McNeil said.

Si was one of those dogs. Described as a “big gentle giant” by his owner Megan Fraser, Si is an eight-year-old St. Bernard. Fraser said she wanted to help with this particular clinic because she too is anxious about needles.

Fraser says she saw first hand the calming effect Si had on the patients. “You could see the relief in their face when the dog walked in the room. You could see the stress leaving their bodies. Patting the dog and kind of talking to him while it’s happening.” 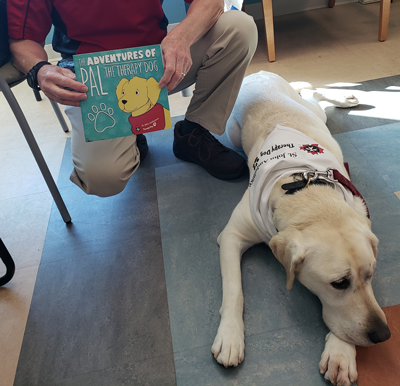 Pal and is his proud owner, Don LeBlanc of Fall River.

Due to pandemic restrictions, this was Si’s first gig in almost two years. And Fraser said her four-legged friend couldn’t wait. “As soon as he sees that (St. John Ambulance) bandana come out he gets so excited. He knows he’s going to work.”

Fraser said that for Si it was all business. “When he was at the clinic he knew he had a job to do. In the waiting room he would go around and see all different people. He knows he’s working.”

St. John Ambulance volunteer Don LeBlanc has been in the dog therapy world for 19 years and has more than 1,200 visits under his leash. But this vaccine clinic was a first for him and his Labrador Retriever Pal.

Pal is a bit of a celebrity, having a children’s activity and colouring book named after him. The book is published in English and French and is used across the country through the St. John Ambulance program.

“For me, the reason I got involved in the first place, many years ago, was because I felt a dog has a lot of love to give and it’s not right just to keep it all to me,” said LeBlanc.

“It was pitched to me that this clinic was going to be for people who had a fear of needles or had special needs that could benefit from having Pal there. It certainly made it special for Pal, and for me, that’s for sure,” LeBlanc said.