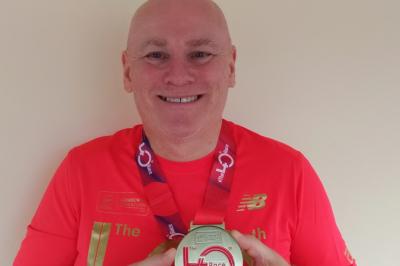 Martin Fisher, volunteer resources consultant at Nova Scotia Health shows off his medal from the London Marathon.
Twenty years ago, after running a half marathon, Martin Fisher said, “If this is a half marathon, there’s no way I’m running a full one.”
If you had told him in March that he would run three full marathons this year, he’d still be laughing about it.
Fisher is a volunteer resources consultant at Nova Scotia Health. He works specifically in Northern Nova Scotia – including Colchester, Cumberland, Pictou County and East Hants areas.
Since September, Fisher has run in the Great North Run half marathon in Newcastle, England; the London Marathon; and the New York Marathon, all virtually.
Once COVID-19 restrictions started in March and recreational facilities were closing, Fisher wanted to focus on what he could still do.
At the time, he didn’t plan on running more than around the block. His main goal was and is to keep mentally and physically fit and active by using exercise as an outlet.
“I found running was a great way of burning up any nervous energy and giving me a space to clear my head and my thoughts. Running is a good escape and outlet for all of the things going on around you,” said Fisher.
The biggest challenge for Fisher was getting started and taking that first step out the door.
Being cautious of previous injuries and not having run for a long time, he wanted to ease into it while finding a level where he was still pushing himself, to avoid a negative impact on his body.
Marathons hosted virtually provide greater accessibility to participate since you no longer have to travel to the marathon location.
It was a different environment for Fisher at first, having run in large events over the years with as many as 50,000 people running. He said the motivation of running alone really relies on mental focus and mental strength.
To track the runner’s distance during the London marathon, they used a tracking app with a GPS.
“There were people on the app from world athletics that would give words of encouragement during the marathon... The app was really good to help with motivation and focus. It takes a different level of focus when you’re on your own,” said Fisher.
While he was running alone, 45,000 people from 160 countries ran the London Marathon globally, so he knew he wasn’t alone.
During Fisher’s preparation for the marathons, he has been raising awareness and funds for the We Care About Cancer Fund through the Colchester East Hants Health Foundation. Every dollar from the fund goes directly to the patients, so it was an easy choice for Fisher.
“As a non-elite runner, it’s really the ethos for a lot of us that if we’re going to put the effort in training and getting fit, we want to see some benefit in our community,” said Fisher.
Fisher is not going to say never to run marathons again, as he said that to himself 20 years ago. He plans to use his treadmill and snowshoes to keep himself active throughout the winter, as he believes it’s important to stay active regardless of how much you’re doing.
“The important thing is you might think ‘I can only do 1 to 2 km this morning, why bother when I could do more in the summer?’ but each step out the door is important regardless of the distance you’re doing, and it does make a difference.”
At the end of the day, he says it’s not about breaking records; it’s about you as an individual and the benefit for yourself.
“By keeping yourself as healthy as you can be, you’re also having a positive effect on your community. I was struggling to take that first step. But still, people in the community have told me how inspired they’ve been seeing me over the past six to seven months because of me being active, getting fit and achieving some unexpected goals. It has encouraged them to get active themselves,” said Fisher.
For anyone looking to get started, Fisher encourages them to remember his story and take that first step out the door.
The following are some of Fisher’s running statistics since May 28, 2020: